With its long life and low power consumption, LED is expected to change the entire lighting industry, but the main obstacle to its rapid adoption is the high cost of the LED itself. The cost of LED luminaires (complete power lighting) varies, but the cost of LEDs typically accounts for about 25% to 40% of the cost of the entire luminaire, and is expected to still account for a high percentage over the next few years (Figure 1). 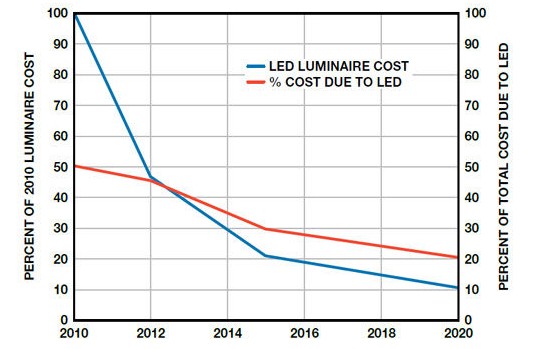 One way to reduce the cost of the overall luminaire is to drive the LED at the highest possible DC current within the limits allowed by the product specification. This current may be much higher than its â€œstep currentâ€. This may result in higher lumens if driven normally. /cost ratio. 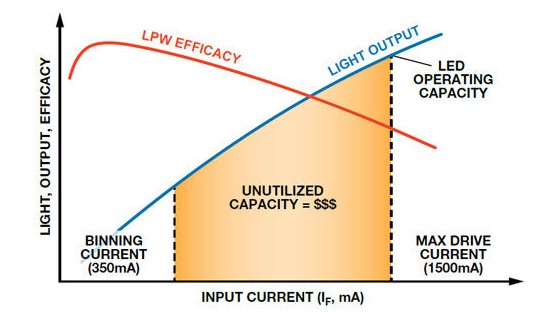 However, this approach requires a higher current driver. Many solutions drive LEDs at low currents (<500mA), but there are few high current (700mA to 4A) options. This phenomenon seems surprising because the semiconductor industry has a large number of DC-DC solutions with a capacity of 4A, but they are designed to control the voltage instead of controlling the LED current. This article will explore some simple techniques for converting an off-the-shelf DC-DC buck regulator to a smart LED driver. 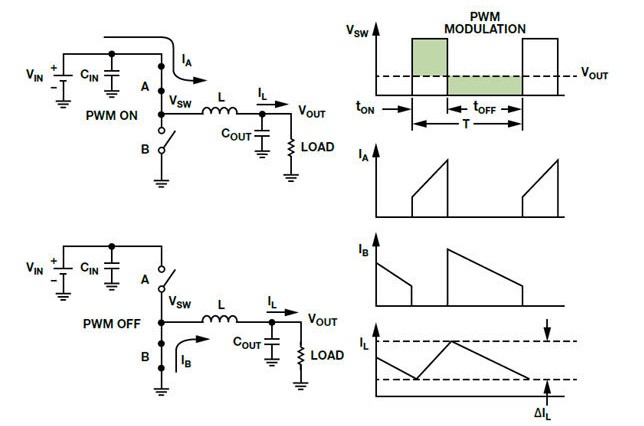 The ADP2384 high efficiency synchronous buck regulator specifies an output current of up to 4 A with an input voltage of up to 20 V. Figure 4 shows the normal connection used to regulate the output voltage. 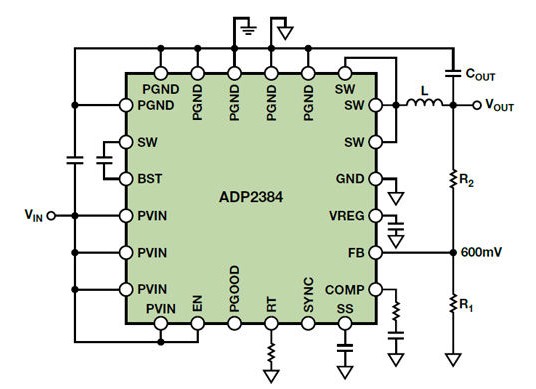 In operation, the divided output voltage is connected to the FB pin and compared to the internal 600 mV reference to generate the appropriate duty cycle for the switch. At steady state, the FB pin is held at 600 mV, so VOUT is adjusted to 600 mV times the division ratio. If the upper resistor is replaced by an LED (Figure 5), the output voltage must be any desired value (within the nominal range) to maintain the FB at 600 mV; therefore, the current through the LED is controlled at 600 mV/RSENSE. 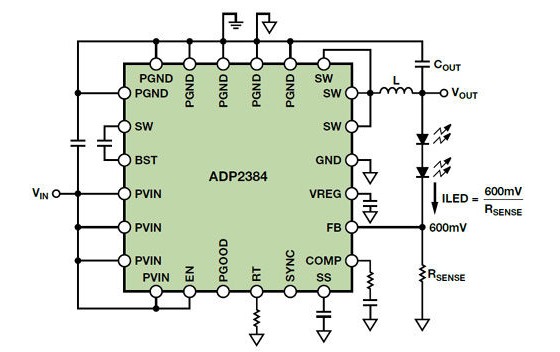 This circuit works well when setting the LED current from the FB to the ground precision resistor, but the resistor consumes a lot of power: P = 600 mV Ã— ILED is not a big problem for low LED current, but at high LED current, Inefficiency increases the amount of heat emitted by the luminaire (600 mV Ã— 4 A = 2.4 W). Lowering the FB reference voltage can proportionally reduce power consumption, but most DC-DC regulators do not have this way of adjusting this reference. Fortunately, two techniques can reduce the reference voltage of most buck regulators: use the SS/TRK pin - or offset the RSENSE voltage.

Many general purpose buck ICs include soft start (SS) or trace (TRK) pins. The SS pin slowly increases the switching duty cycle at startup to minimize startup transients. The TRK pin allows the buck regulator to follow an independent voltage. These features are usually combined on a single SS/TRK pin. In most cases, the error amplifier compares the minimum of the SS, TRK, and FB voltages to the reference, as shown in Figure 6. 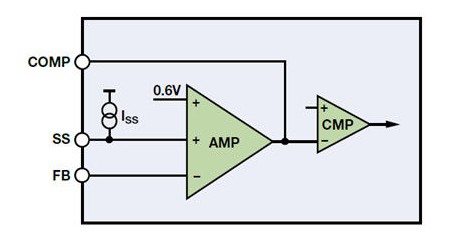 Figure 6. Working with the soft start pin of the ADP2384

For luminaire applications, set the SS/TRK pin to a fixed voltage and use it as a new FB reference. It is very effective to use a constant voltage divider as a reference. For example, many buck regulator ICs include a controlled low voltage output - such as the VREG pin on the ADP2384. For higher accuracy, a simple 2-pin external precision reference such as the ADR5040 can be used. In any case, a resistor divider from the supply to the SS/TRK pin forms a new reference. Setting this voltage between 100 mV and 200 mV typically provides the best balance between power consumption and LED current accuracy. Another advantage of the user-selected reference voltage is that RSENSE can select convenient standard values â€‹â€‹to avoid specifying or assigning any precision resistor values â€‹â€‹to set the expense and inaccuracy of the LED current. 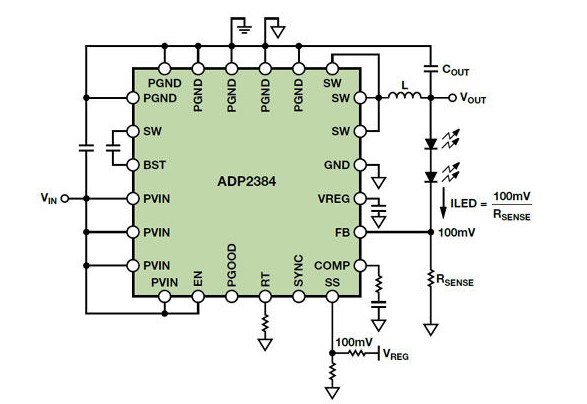 Using the SS or TRK pin method is not feasible for all buck regulators because some ICs do not have these pins. Also, for some buck ICs, the SS pin changes the peak inductor current, not the FB reference, so you must review the product data sheet carefully. As an alternative, a RSENSE voltage offset can be generated. For example, a resistor divider between a precision voltage source and RSENSE provides a fairly constant offset voltage from RSENSE to the FB pin (Figure 8). 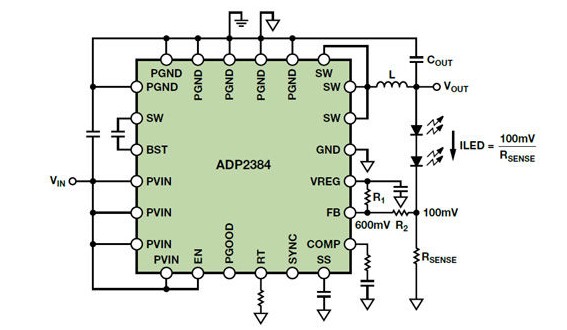 The required value of the resistor divider can be calculated using Equation 1, where VSUP is the auxiliary regulation voltage and FBREF(NEW) is the target voltage across RSENSE.

Therefore, an effective feedback reference of 150 mV can be obtained using the following equation, where R2 = 1 kÎ© and VSUP = 5 V:

The LED current is:

This method does not require an SS or TRK pin. The FB pin is still regulated to 600 mV (but the RSENSE voltage is adjusted to FBREF(NEW)). This means that other features of the chip, including soft-start, tracking, and power good indications, will still function.

The disadvantage of this method is that the offset between RSENSE and FB is severely affected by the accuracy of the power supply. Using a precision voltage reference such as the ADR5040 may be ideal, but a less accurate Â±5% reference tolerance may result in a Â±12% change in LED current. Table 1 shows the comparison results:

Another key to precise current regulation is the proper layout to connect to the sense resistor. A 4-pin sense resistor is ideal, but it can be expensive. With good layout technology, we can achieve high precision using traditional 2-pin resistors, as shown in Figure 9. 4 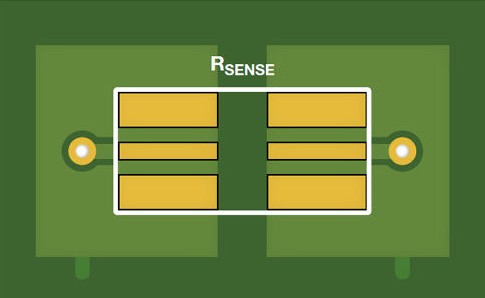 Features other than adjustment

Using an off-the-shelf buck regulator to regulate the LED current is very simple. The example here uses the ADP2384. A more detailed paper also includes an example using the ADP2441, which has fewer pins and a 36 V input voltage range. This article shows some examples of how to implement many of the "smart" features provided by dedicated LED buck regulators, such as LED short/open fault protection, RSENSE open/short fault protection, PWM dimming, analog dimming, and current foldback Thermal Protection. In this article we will use the ADP2384 in the previous example to discuss PWM and analog dimming, current foldback.

A key requirement for "smart" LED drivers is the use of dimming to adjust LED brightness in one of two ways: PWM and analog. PWM dimming controls the LED current by adjusting the pulse duty cycle. If the frequency is above 120 Hz, the human eye will equalize these pulses to produce a perceptible average luminosity. Analog dimming adjusts the LED current at a constant DC value.

PWM dimming can be implemented by turning the NMOS switch inserted in series with RSENSE on and off. These current levels may require power devices, but adding power devices can offset the size and cost benefits gained by using a buck regulator that includes its own power switch. Alternatively, PWM dimming can be performed by quickly turning the regulator on and off. At low PWM frequencies (<1 kHz), this still provides good accuracy (Figure 10). 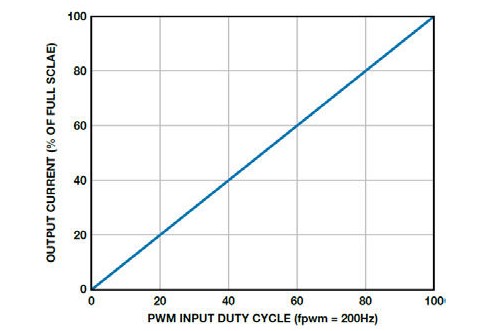 Like all general purpose buck regulators, the ADP2384 has no pins to apply the PWM dimming input, but can manipulate the FB pin to enable and disable the switch. If FB goes high, the error amplifier goes low and the buck switch stops. If the FB is reconnected to RSENSE it will resume normal regulation. This can be achieved by a low current NMOS transistor or a general purpose diode. In Figure 11, the high PWM signal connects RSENSE to the FB for LED regulation. The low PWM signal turns off the NMOS and has a pull-up resistor that turns the FB level high. 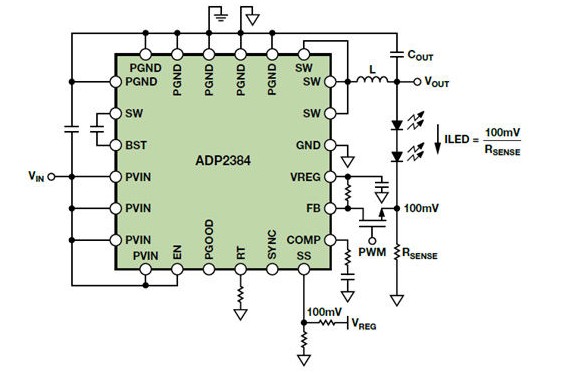 Although PWM dimming is very popular, sometimes we need noise-free "analog" dimming. Analog dimming only regulates constant LED current, while PWM dimming performs chopping. If two dimming inputs are used, analog dimming is required because multiple PWM dimming signals can produce beat frequencies, resulting in flicker or audible noise. However, PWM can be used for one dimming control and analog for another dimming control. Using a general-purpose buck regulator, the easiest way to implement analog dimming is to control the FB reference by adjusting the power to the FB reference circuit, as shown in Figure 12. 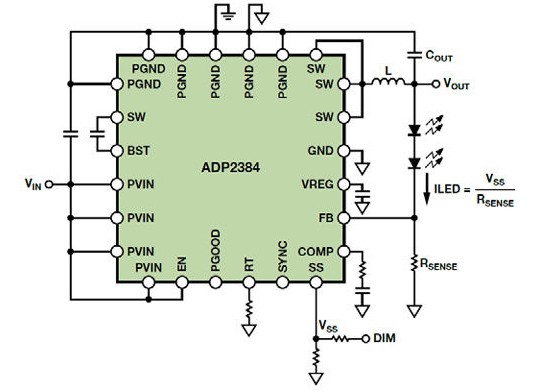 Since the lifetime of an LED is highly dependent on its operating junction temperature, it is sometimes necessary to monitor the LED temperature and, if the temperature is too high, it must respond. The cause of abnormally high temperatures may be improperly connected heat sinks, excessive ambient temperatures, or other extreme conditions. A common solution is to reduce the LED current when the temperature exceeds a certain threshold (Figure 13). This is called LED thermal foldback. 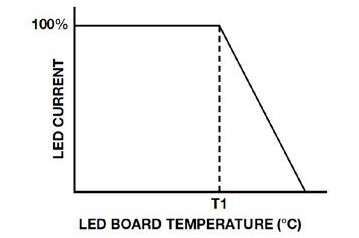 In this type of dimming, the LED is held at full load current until a temperature threshold (T1) is reached, above which the LED current begins to decrease with increasing temperature. This limits the junction temperature of the LEDs and maintains their useful life. Low cost NTC (negative temperature coefficient) resistors are commonly used to measure the heat sink temperature of an LED. The NTC's temperature makes it easy to control the LED current by making minor modifications to the analog dimming scheme. If the SS/TRK pin is used to control the FB reference, a simple method can be used to place the NTC in parallel with the reference voltage (Figure 14). 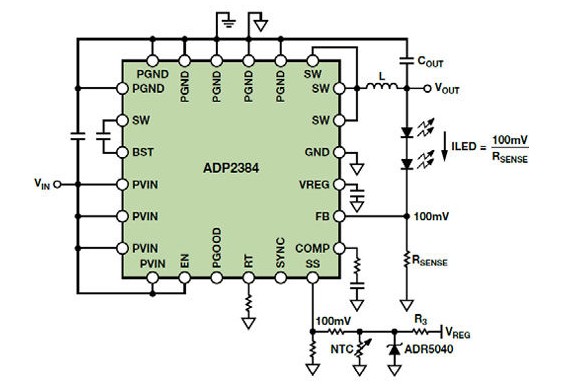 These techniques should be used as a general guideline for implementing full LED functionality using standard buck regulators. However, since these features are beyond the target range of the buck IC, it is best to contact the semiconductor manufacturer to confirm that the IC can handle these modes of operation.